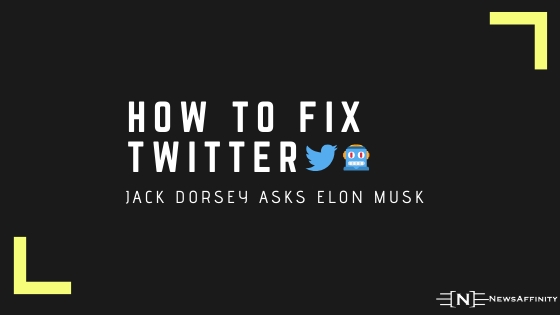 Elon Musk’s suggestion for how to fix Twitter, “the best way to do it is by Identifying the bots.”

“Give us some direct feedback,” said Dorsey, who spoke to Musk via a video call from a company meeting in Houston. Musk was projected onto a giant screen as thousands of Twitter employees watched the two executives chat. “If you were running Twitter,“ Dorsey continued, “what would you do?”

“I think it would be helpful to differentiate” between real and fake users, Musk replied, according to a video posted to Twitter by an employee. “Is this a real person or is this a bot net or a sort of troll army or something like that?”

What @elonmusk thinks Twitter could be doing better. #OneTeam pic.twitter.com/BvAUee7rmn

It’s possible at least one of the groups Musk had in mind was “TSLAQ,” a loose collective of critics, skeptics and short sellers who often tweet using the hashtag combining Tesla’s ticker symbol with the -Q that is added when listed companies go bankrupt.

Musk faces relentless criticism from the group on Twitter. The billionaire is one of the site’s most popular users and one of its most controversial. He called a British caver a “pedo guy” in 2018 and was later sued for defamation. Later that same year, he tweeted that he was thinking of taking Tesla private, prompting a temporary halt on trading and a U.S. Securities and Exchange Commission lawsuit.

Musk, one of many high-profile Twitter users to speak at the company event this week, also predicted that humans would send a tweet from Mars sometime in the next five to nine years, according to videos posted by employees. After Dorsey and Musk finished chatting, model and cookbook author Chrissy Teigen, another popular user, made an appearance on stage.

Ransomware Explained : How to protect yourself from ransomware

Alphabet is now a $1 trillion company