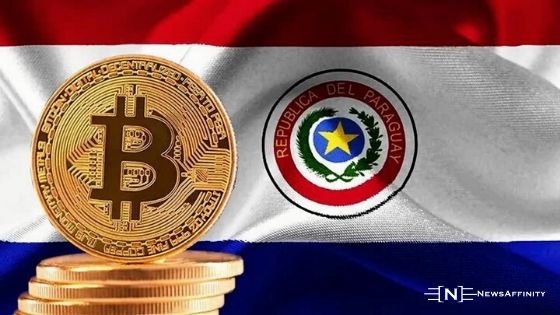 Latin America is solidifying its reputation in the bitcoin market. El Salvador announced plans to make the flagship cryptocurrency legal tender in the nation. Paraguay could be next in line, with Congressman Carlitos Rejala tipping his hand to a forthcoming bitcoin push

To show his support, Rep. Rejala responded to a report about a major entertainment group in the country, Grupo Cinco, deciding to accept bitcoin as a form of payment. The lawmaker tweeted, “This is Paraguay. July we legislate,” with a bitcoin emoji. In fact, the lawmaker is crafting legislation that would further integrate bitcoin into the Paraguayan economy, though the details of the bill are unclear. His message triggered a wave of responses on social media, including one from Jay Hao, CEO of major cryptocurrency exchange OKEx, who simply responded with a fire emoji. 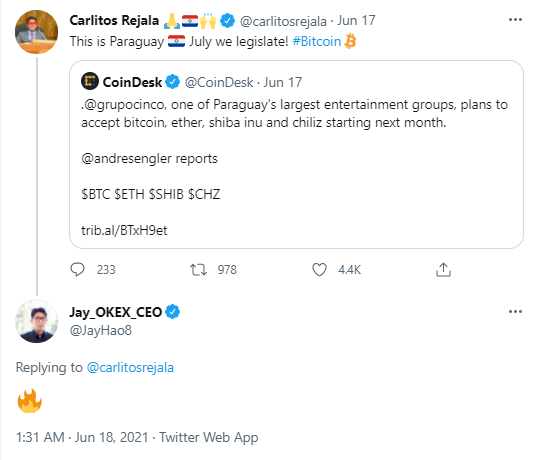 Rep. Rejala’s remarks fueled speculation that the country plans to make bitcoin legal tender in Paraguay. Rep. Rejala has since clarified that classifying bitcoin alongside the guarani is probably not in the cards. He reportedly said that such a development would be “impossible” from a political standpoint, but he has made his intentions for Paraguay to become digital-asset “friendly” very clear.

Rep. Rejala believes his bill stands a good chance of Congressional approval. The Congressman explained to Reuters that he wants banks and regulators to make it so locals and tourists can legally transact with bitcoin without having to look over their shoulder.

He further explained, “Because we  know that there are illegal transactions here and in other countries…We want to be a friendly country with cryptocurrencies.”

Rep. Rejala is not alone. Bitcoin.com.py CEO Juanjo Benitez Rickmann revealed on Twitter that he is working alongside the Congressman. In addition to raising Paraguay’s cryptocurrency profile, they are also looking to harness the country’s renewable energy resources via hydroelectric power. He cited the country’s Itaipu and Yacyreta dams as ways to access more sustainable and cheaper forms of energy than fossil fuel sources.

Meanwhile, sustainability is a major theme in the cryptocurrency market currently given the high energy consumption involved with bitcoin mining, the process by which new coins are created on the blockchain. Computers run by miners seek to be the first to solve tricky equations so that bitcoin transactions can be completed on the blockchain. In exchange, they are rewarded with bitcoin. It takes a massive amount of computational power to do this, and this is where Latin America comes in.

El Salvador is also playing to its strengths in this area. President Nayib Armando Bukele Ortez recently revealed that a state-run geothermal company would direct renewable energy generated from volcanoes toward delivering electricity to bitcoin miners.

Paraguay’s Rejala is touting the country’s role as a leading global producer of clean and renewable power in a bid to attract entrepreneurial talent. He also mentioned the country’s low taxes and a high workforce of millennials and Generation Z’ers.

In fact, Paraguay boasts the lowest tax rate in the Latin America region at 10%. The country reportedly collected about USD 2.1 billion in tax revenue in 2020, down nearly 13% from 2019 levels as a result of the pandemic. Some 500 companies contributed more than 40% of 2020’s tax revenue, led by state-run Administración Nacional de Electricidad (ANDE). 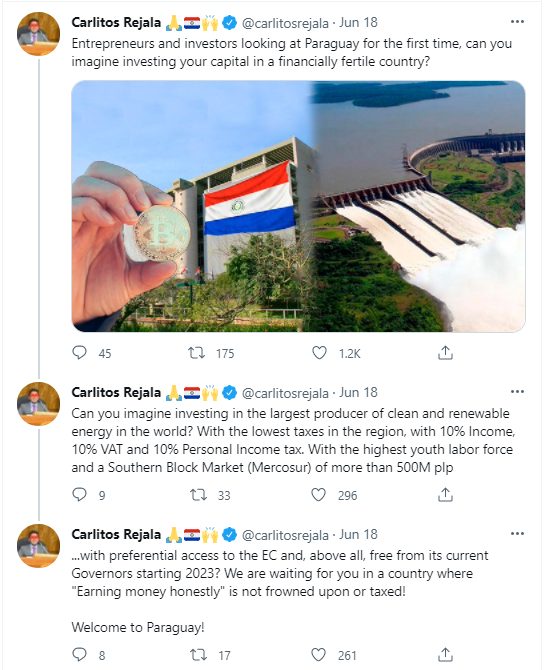 Mexico is going in the opposite direction of its bitcoin-adopting, Latin American peers. On one hand, Ricardo Salinas Pliego, one of Mexico’s wealthiest businessmen, is looking for his bank, Banco Azteca, to be a leader in the cryptocurrency space and to accept bitcoin. Mexico’s central bank, the Bank of Mexico, came out swinging in response, however, indicating in a statement that not only are digital currencies not legal tender but they also do not have a place in the country’s financial system.

Salinas explained in a video that his belief in bitcoin came to be as a result of the hyperinflation that Mexico experienced decades ago; he planned for bitcoin to have a role in his portfolio for the coming decades. Most recently, inflation in Mexico is running at about twice the central bank’s target rate. Annual inflation is hovering at just under 6% compared to a target of 3%.

Paraguay’s economy was mired in recession before the pandemic came on the scene and was finally starting to recover in early 2020. The country started fighting off the COVID-19 pandemic in 2020 but has since hit a setback. A dangerous COVID-19 variant from Brazil has been spreading through Latin America and has made its way to the Paraguayan population, leaving the South American nation scrambling to contain the disease.

Paraguay has been recording slightly more than 18 deaths per million people, surpassing the rates in India, South Africa, the U.K. and the United States. The country has the dubious distinction of having the highest death per day rate of any country in the world. GDP expanded at a rate of 0.60% in the first quarter year-over-year, but the government issued renewed lockdown measures in March in response to the surge in coronavirus infections. Less than 5% of the country’s population of roughly 7 million has been vaccinated.

In terms of occupations, much of the Paraguayan population relies on informal sectors of the economy, which makes data and statistics hard to come by. Agriculture is one of the top sectors of employment. In the half-decade leading up to the pandemic year, the country’s economy was on the rise, expanding at an annual clip of about 4%, fueled largely by demand for commodities. Paraguay is a major exporter of products such as soy, so coupled with rising prices and good weather conditions, it has benefited from its strategic position while the economies of other regional countries have shrunk.

Paraguay has been looking to diversify its economy, and making a push toward bitcoin mining would certainly be a step in that direction. In addition to the headwinds from COVID-19, the country has long faced other hurdles such as corruption, inadequate infrastructure, and slow-turning wheels of change in the economy.

Written in collaboration with Sharemoney

How To Redesign Your Bedroom