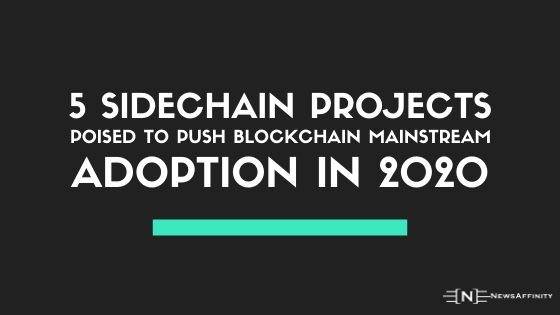 It is no more news that the blockchain paradigm that was in full steam just over a year ago has encountered a bit of a snag.

Enterprises and startups are finding it a tad difficult to implement blockchain solutions and applications looking to find a balance between scalability, security, and decentralization. This setback stems from the apparent limitations of established and popular blockchains that boast robust security and decentralization mechanisms at the expense of speed.

While this is a given, we have witnessed the emergence of projects implementing solutions that might put an end to blockchain’s three-pronged dilemma. In most cases, these solutions have opted to create a performance-focused secondary layer of chains, which would serve as extensions for blockchains with scalability-related problems. And since the majority of these solutions have laid the foundation of their products in 2019, it is looking ever more likely that 2020 is poised to usher in an era where sidechains might get the blockchain adoption train moving again.

In light of this eventuality, I have decided to highlight five of the most promising sidechain projects on pace to contribute to the Blockchain adoption narrative in 2020.

The launch of Matic Network‘s Plasma-based layer 2 scaling solution last year marked a turning point for the Ethereum blockchain. With Matic’s Plasma framework, combined with its decentralized Proof-of-Stake Validator layer, dapps can be empowered with mass adoption-level performance without foregoing security and decentralization. Matic Network offers off-chain transactions with a much higher TPS rate at a much cheaper cost as compared to the Ethereum base chain.

The final states of these transactions are broadcasted to the Ethereum blockchain via checkpoints provided by Matic’s Validator layer, thereby bypassing congestion and ridiculous transaction fees. As such, Matic Network has the ability to process as many as 65,000 TPS on a single sidechain (with the ability to seamlessly deploy multiple sidechains through horizontal scaling), as opposed to the 7 TPS recorded on the Ethereum mainchain.

Owing to its viability and growing reputation as one of the most efficient sidechain projects, Matic Network’s onboarding activities have been impressive, with over 40 blockchain apps already incorporating its scaling infrastructure. In addition, the project has also announced collaborative partnerships with many leading industry players, including Whitebit, an advanced crypto exchange platform. Through this collaboration, MATIC holders will now be able to avail instant premium trading services that include low transaction fees, liquidity, and security.

Tron’s Sun Network is one of the latest introductions to the growing number of scalability-enabling projects in the blockchain landscape. Launched in May 2019, Sun Network is a blockchain expansion plan that comprises cross-chain and sidechain infrastructures poised to boost the Tron network’s efficacy as regards transaction and smart contract execution. Dappchain, which connotes the sidechain section of this project, offers developers a much-improved ecosystem with faster transaction speed, low energy consuming capacity, and better security features.

More impressively, developers, depending on the volume of activities their applications generate, can request multiple sidechains. As is the case with the mainchain, Dappchain incorporates the DPoS consensus mechanism. The development team has also availed its SDK to ensure that it is easy for developers to customize dapps or migrate them to the sidechain.

The Bytom team believes that an efficient blockchain solution would require a layered framework of chains. With Bytom, each sidechain is set up to unburden the mainchain of functionalities that could reduce its efficiency. In the Bytom ecosystem, the mainchain, through a PoW consensus mechanism, facilitates a permissionless environment where decentralization exists. Whereas the sidechains incorporate the BFT consensus algorithm, which fixates on improving transaction speed.

Combining the unique strengths of the mainchain and its sidechains allows the Bytom ecosystem to offer fast transactions with little or no backdrop as regards decentralization.
It is worth mentioning that developers can create and customize sidechains for their dapps, and there are database or consensus plugins available for easier implementation.

Loom Network, which is currently based on the Ethereum blockchain, opts for a similar off-chain framework at play in all of the solutions mentioned so far. However, the development team spiced things up with an element of interoperability, allowing users to communicate with major public chains including Tron, Bitcoin, Ethereum, and Binance chain.

To achieve this, the network has integrations in the aforementioned blockchains. The multichain model of this solution provides developers in need of serious scaling resources, with a means to eradicate time lags and decongest applications.

Echo, a Bitcoin-based dapp network, recently launched its sidechain solution that looks to integrate the Bitcoin cryptocurrency as the native coin for decentralized finance (DeFi) applications. The Bitcoin blockchain has traditionally not been known for its dapp-enabling capabilities.

However, Echo has introduced a way to circumvent Bitcoin’s rigid infrastructure, capitalize on its decentralized system, and help developers implement trading, lending, or other fintech dapps. Unlike the majority of Bitcoin-based sidechain projects, Echo wants to establish a trustless network where validators are chosen randomly via a consensus technique called Proof of Weighted Randomness (PoWR).

As a result of the activities of the teams behind the projects mentioned in this article, blockchain is experiencing a technical overhaul. It is expected that these solutions will have meaningful impacts on the blockchain mainstream adoption narrative in 2020, and possibly, establish a theme that could sustain market growth for the foreseeable future.