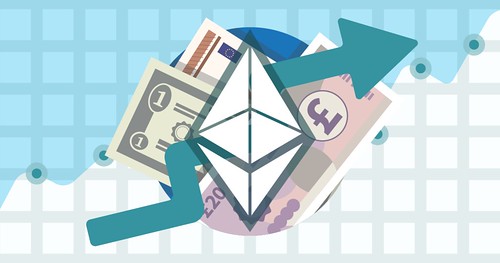 At the beginning of March the prices fell on the crypto market in a landslide to the bottom. Within a few days half the prices of Bitcoin and many Altcoins, or the losses themselves were even higher. However, in the past few months, a significant recovery has set in. Many of the Top crypto-currencies were able to catch up most of the losses, many Coin, such as the market leader in Bitcoin are already moved back close to their highs of the year in February 2020 approach.

One of the winners of the last couple of weeks Ethereum, without a doubt. The most valuable Altcoin by market capitalisation recorded since its low point in mid-March, a strong growth. To 120 percent of the ETH/USD price has risen since then. So who has invested wisely directly after the Corona Crash in the Altcoin can look forward already now a strong return on investment.

In the past seven trading days of ETH/USD continued its upward trend, although the gains are expected to be only small. The rate rose by 2.7 per cent and is currently trading at around 243,50 dollars.

The most important facts about the ETH/USD exchange rate development

We consider the most important facts for the development of courses of ETH/USD in the past trading week:

Thus, the Altcoin exchange rate moved slightly above the weekly average value. The market capitalization of ETH/USD has risen in the past 24 hours around 78,13 of millions of dollars. Thus, the value of Altcoins is growing on now 27,114 billion dollars. In the crypto-Ranking by market capitalisation Ethereum is more safely behind Bitcoin at number 2 and is by far the most valuable Altcoin in front of XRP and Bitcoin Cash.

ETH/USD 17 per cent below the year high

The low of the year was on 12. March reached at 110,60 USD. In order for XRP/USD has recorded in the last three months, a price increase of around 133 dollars. In percentage terms, the growth of Ethereum exceeds the values of Bitcoin, XRP or Bitcoin Cash significantly.

To the best value of the current year, a good chunk of the missing ETH/USD still. 14. February, the Altcoin exchange rate stood at around 284 dollars. Of this brand Ethereum is still around 17 percent. In this perspective, the Bitcoin performance is slightly better. BTC/USD is missing with only around 10 per cent of the year’s best.

Ethereum: the Bull Run in sight?

The confidence in the further development of Ethereum seems to be currently high. Thus, the total network fees of Ethereum were several times higher than in the case of Bitcoin, as an analysis of Glassnode shows. Miner earned in the Ethereum network better than Bitcoin. Also, the number of transactions in the network has increased significantly. This speaks for a high level of activity in the network and growing interest in the Altcoin.

Several analysts have commented very positively about the Ethereum-Trend. A Bull Run, many of them for probably. The confidence in Ethereum is also likely to be related to the forthcoming Launch of Ethereum 2.0 together, to lift the network to a new technological level.

Illegal miner of criptomonedas is captured