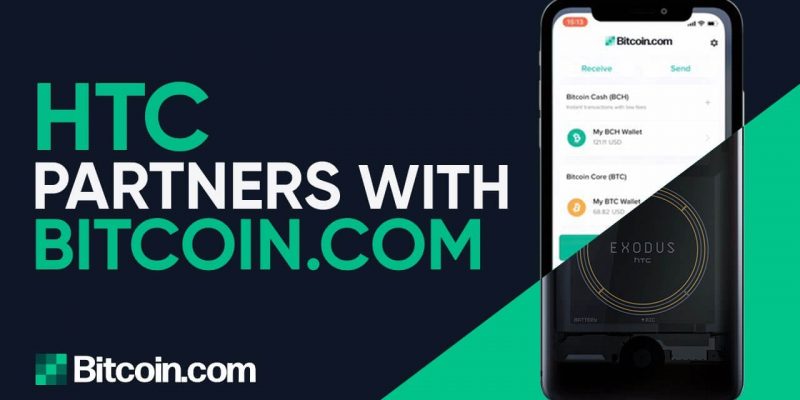 HTC has partnered with Bitcoin.com for cryptocurrency support in smartphone Exodus 1

The relationship, however, benefits the partners mutually. HTC aims to set its smartphone apart by making it cryptocurrency trading simple for people using their smart devices. Subsequently, HTC will also garner a chunk of traffic to Bitcoin.com where 4 million users are already using their wallets for crypto trade and transactions.

Exodus 1 was unveiled in the month of May where it is recognizably the first device to have BCH or Bitcoin Cash compatibility. And, the best part is that there’s no requirement for downloading the BCH wallet. Once they update their device, Exodus 1 users will find a pre-installed Bitcoin.com wallet app.

The decentralized chief officer from HTC, Phil Chen has stated that the Exodus rendition has always aimed to align itself towards the transformative aspects of public blockchains with respect to internet and money. The Zion Vault is also to support BCH natively in their hardware where the BCH blockchain can be an alternative to the traditional payment platforms.

While the future entails special discounts for those using BCH to pay for their phones, this partnership is perhaps the first step towards the future implementation of blockchain.

Bitcoin.COM CEO Stefan Rust has stated that he feels the various synergies between HTC and Bitcoin.com. They are also excited to start on with this journey as partners.

Roger Ver, the Bitcoin.com executive chair has also added, saying that this partnership will propel Bitcoin Cash to be used as electronic cash, operating on P2P infrastructure for all the global Exodus users.

Is this the comeback HTC was looking for?

This partnership has also sparked a sort of comeback for HTC. Earlier this year, a report revealed that the share of the mobile market of HTC had almost evaporated where they held a 1% market share in the year 2018.

But this year with their increasing involvements surrounding crypto spaces and blockchain, they are working their way towards a reprisal. HTC has featured a number of crypto operability forms to their devices where they have even introduced an in-built ERC-20 token wallet on their flagship Exodus 1. The implementation happened at the same time when the smartphone was unveiled. They also announced that Exodus 1S will have BTC or Bitcoin full node functionalities.

The firm also has some investments in various blockchain ventures and companies associated.

A recent report has also unveiled that South Korean giant LG is also partnering up with blockchain developers to produce a rival to the Klaytn blockchain smart devices from Samsung. Industry insiders have stated that LG has already discussed the scopes and aspects with local Dapp developers. They have even worked out an instance of blockchain implementation in their future product.

While it may seem that the companies are already running alongside one another to implement blockchain technology, it is important to remember that decentralization holds the keys to future progression.

How to Connect the Canon printer to WiFi