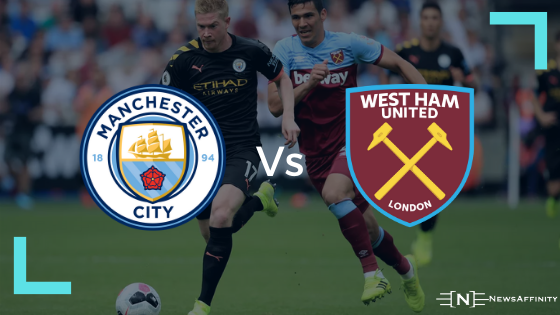 After being hit with a shocking two-year ban from European competitions, Manchester City will look to pick themselves up and focus on their performances on-field when they play hosts to West Ham United on Wednesday. The Sky Blues are currently second in the league table but failing to win versus West Ham could allow Leicester City to overtake them by the end of the match week.

Here is how Man City could line up against the Hammers this midweek.

Pep Guardiola is likely to retain his four-man backline despite finishing on the wrong end of a 2-0 defeat to Tottenham Hotspur in the last game.

Oleksandr Zinchenko has already been ruled out against West Ham due to suspension, meaning Benjamin Mendy is the only remaining option at left-back. But, things could remain unchanged on the opposite flank, where Kyle Walker is almost guaranteed to retain his place in the team, ahead of Joao Cancelo.

There has been no update of Aymeric Laporte’s fitness after he was ruled out of the Spurs game due to fatigue. However, we do expect the Frenchman to return to the side this time around, at the expense of Nicolas Otamendi. He is set to partner Fernandinho at the heart of Manchester City’s four-man backline.

Meanwhile, Ederson is a definite starter in between the sticks as the Brazilian looks to get back in form after struggling against Tottenham the last time out.

David Silva is expected to get the nod ahead of Ilkay Gundogan in central midfield. His experience and technical prowess could be crucial in a Man City side that will be dejected after being denied future involvement for two seasons in the UEFA competitions.

The veteran Spaniard is tipped to partner Kevin de Bruyne, thus forming the main source of Manchester City’s creativity. It will be imperative for the West Ham defenders to keep an eye on these two individuals. Meanwhile, Rodri is a guaranteed starter in the holding midfield role.

Raheem Sterling has been ruled out against West Ham due to a hamstring injury. He is likely to be replaced by Gabriel Jesus, though Bernardo Silva and Phil Foden are also available.

The Brazilian is set to start at left-wing, with Riyad Mahrez operating on the opposite flank. And finally, the Man City attack is likely to spearheaded by the one and only Sergio Aguero. 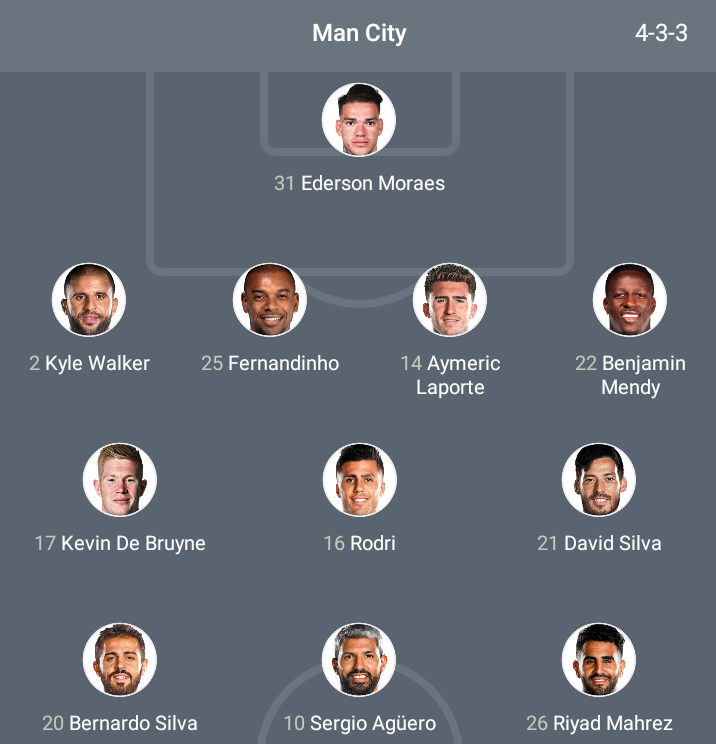 West Ham are back in Premier League action this week as their slightly shortened winter break comes to an end as they take on Manchester City on Wednesday.

The game has been rearranged from eight days ago when it was originally postponed thanks to Storm Ciara wreaking havoc and the match was called off on safety grounds.

Both sets of players had five days off last week before returning to training on Saturday to prepare for a midweek match rather than for their respective matches this weekend to come around.

Off the field, both teams are in a spot of bother. The protests against the Hammers co-owners are looming large on February 29 while for City, they have been banned from European competitions for the next two seasons having been found in breach of Financial Fair Play rules, something the Etihad outfit deny and plan to appeal against.

On the pitch, City have lost their last two in all competitions while the Hammers haven’t tasted victory in the Premier League since New Year’s Day, David Moyes’ first game back in charge of the club having replaced the sacked Manuel Pellegrini in late December.

West Ham slumped into the relegation zone after their last match, which was on February 1, when they threw away a two-goal lead against Brighton to draw 3-3 at London Stadium and now face the league’s top two teams in successive games, starting on Wednesday before a trip to Premier League champions-elect Liverpool next Monday.

Here is how we think the Hammers could lineup at the Man. City Vs West Ham 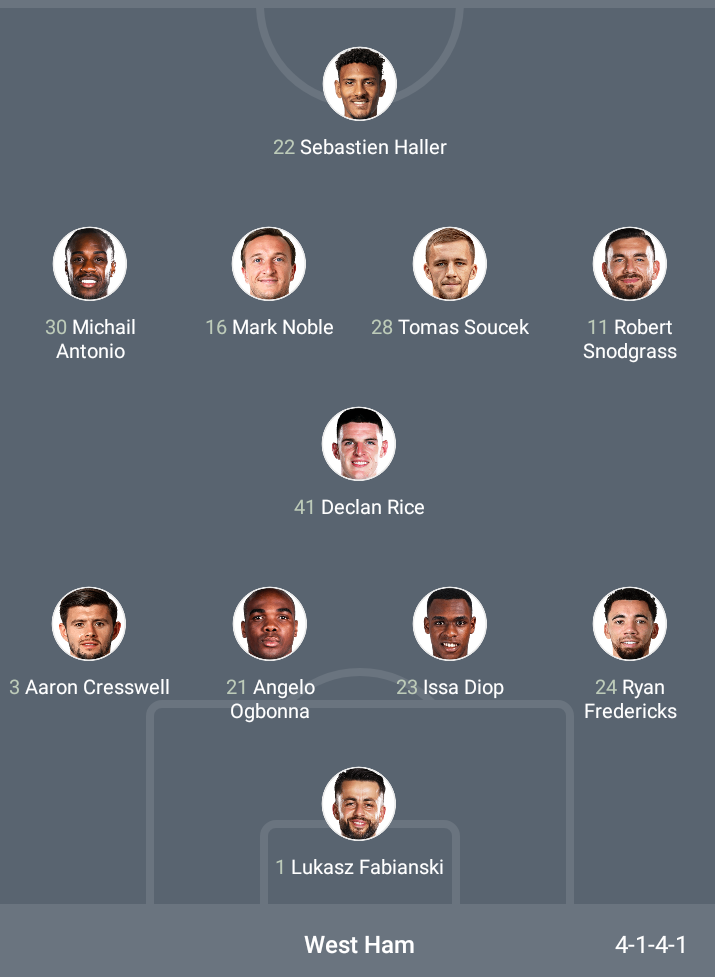 On paper, it is a team set up for damage limitation rather than one that could pick up a highly unlikely result in the north west which is why we have gone for a five-man defence with Fabian Balbuena coming back in,

We have gone for the same midfield that started against Brighton with Declan Rice, Mark Noble, the in-form Robert Snodgrass and January recruit Tomas Soucek lining up behind Michail Antonio.

That means no start in our side for Jarrod Bowen, who could make his debut in midweek either from the start or off the bench. Both options are feasible, we have gone for more solidity in our team however.

Felipe Anderson is in contention for a return as well but that is likely to be off the bench as he has been sidelined for five weeks with a rib injury sustained in the 1-0 loss at Sheffield United in January.

Andriy Yarmolenko is also back in training but is likely to be soon for him, leaving only Jack Wilshere as the long-term absentee after he underwent hernia surgery last month which could rule him out for the rest of the season.

Defending champions City would begin the defence of their Premier League title in perfect fashion, thrashing West Ham at the London Stadium to quickly burst the bubbles of optimism surrounding the east London club.

Raheem Sterling would help himself to a hat-trick as City hit five without reply, Gabriel Jesus and Sergio Aguero scoring either side of the England winger’s treble to secure a huge away victory for Pep Guardiola’s side. 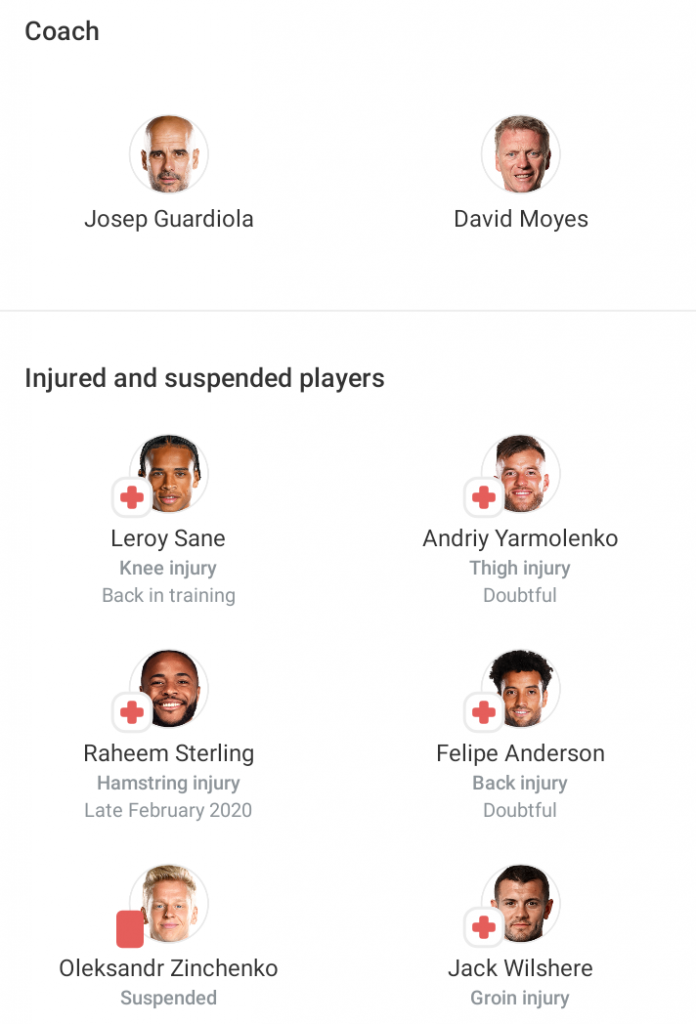 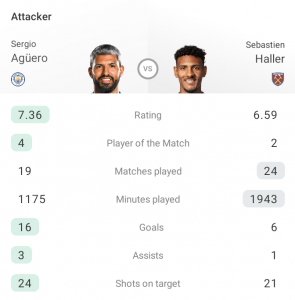 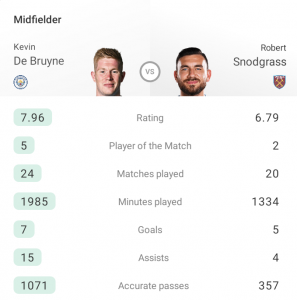 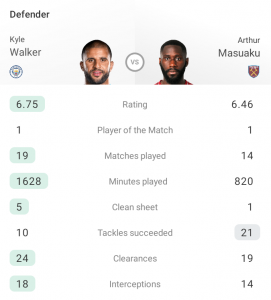 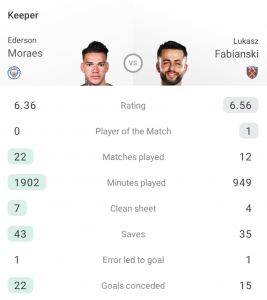 Facts About the Premier League