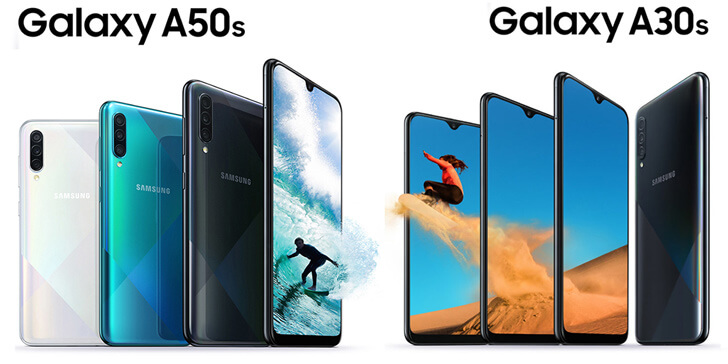 The South Korean Conglomerate, Samsung did come up with a couple of mid-range smartphones, the Galaxy A30s and Galaxy A50s. Moreover, Samsung did launch these devices, specifically in India. According to sources, the smartphone would bring state-of-the-art features such as the tri-camera lens setup. The potential users of the Samsung Galaxy A30s & A50s have to say goodbye to the conventional fingerprint scanner.

For the first time, Samsung will bring the revolutionary in-display fingerprint scanner to the mid-range smartphones. Both the Galaxy A50s and the Galaxy A30s are going to be available in the Indian markets from September 11. People who are a lot into online shopping can buy any of these respective smartphones from Samsung’s e-shop. In addition to this, both smartphones are going to be available in several other online stores along with Opera House by Samsung.

Availability, Price, and Features of the Samsung Galaxy A50s and A30s

According to the official sources, the Samsung Galaxy A50s flaunts a beautiful 6.4-inch next-gen FHD+ Infinity-U display. Samsung ditches the conventional LCD panel and replaces it with the Super AMOLED display. The Galaxy A50s has an already popular Infinity-U display alongside the futuristic in-display fingerprint sensor.

As far as the SoC of the smartphone is concerned, Samsung has put Exynos 7 series SoC, Exynos 9610. On the other hand, the smartphone has the Mali-G72 MP3 Graphics Processor Unit. By the looks of it, The Exynos 9610 has around eight crores for maximum performance. A robust 6GB RAM powers the smartphone, and it comes alongside a robust 128GB internal storage. One of the striking features of the phone is that the smartphone comes with a distinctive MicroSD card slot.

The Galaxy A50s comes with three cameras on the back panel of the phone. The primary camera of the phone has a 48MP sensor whereas the ultra-wide-angle lens and depth camera sports 8MP and 5MP sensors.

The A30s, sports a vivid 6.4-inch HD+ Infinity V display alongside a Super AMOLED display panel. The only similar thing between the Galaxy A50s & the Galaxy A30s is that both smartphones come with the triple camera setup. Nevertheless, it is also essential to note that the A30s will not feature a robust camera like the A50s. Galaxy A30s features a decent primary camera of 25MP, an ultra-wide camera with an 8MP sensor and the modern-day conventional 5MP depth sensor.

The smartphone experts in India suggest that both Galaxy A50s and Galaxy A30s will attract a wide array of customers. Since a very long time, Samsung has not been doing great in terms of mid-range smartphones. However, things are finally starting to favor the Galaxy Fold, Galaxy Note 10 and Galaxy S10 maker.