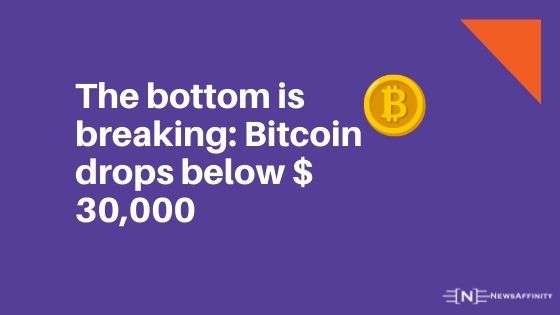 The Bitcoin price drops below $ 30,000 overnight. Meanwhile, the BlockFi lending platform has suffered a severe blow in the USA.

After weeks of the sideways trend, Bitcoin has to accept a price slump again. In the past hours, the bulls fought desperately for the 30,000 mark, but ultimately had to admit defeat to the overwhelming power of the bears. This means that the digital store of value has to cope with a loss of over 6 percent overnight. In a weekly comparison it looks even darker. This is even a minus of almost 10 percent. At press time, Bitcoin is trading at $ 29,689.

With the price collapse of Bitcoin, it is dragging both Ethereum and the entire Altcoin sector into the abyss. The second most valuable crypto currency has to digest a decline of almost 8 percent and thus at least temporarily says goodbye to the 2,000 US dollar zone. At press time, ETH is trading at $ 1,752.

Among the top 10 coins, the numbers look even bleak. While Dogecoin (DOGE) and Ripple (XRP) are still in the single-digit minus range (8.3 and 9.7 percent), Binance Coin (BNB), Cardano (ADA) and Polkadot (DOT) have to cope with price losses of up to 14 percent.

However, the wave of losses is not limited to the crypto space. Large parts of the conventional stock markets also recorded price declines at the start of trading. Both the DAX and the Dow Jones are in the red with 2.6 and 2.1 percent respectively.

With the price slump in Bitcoin, there are new negative reports from the USA, more precisely from the US state of New Jersey. There, a declaration of cease and desist from the public prosecutor’s office fluttered into the building of the lending platform BlockFi on Monday evening. In it, the authorities ordered that the company was no longer allowed to accept new customers from New Jersey. BlockFi CEO Zac Prince has now confirmed the order on Twitter .

The letter accuses BlockFi of having at least partially operated unregistered securities trading with its lending and trading activities. The New Jersey-based company offers interest rates between 0.25 and 8.5 percent, depending on the crypto asset and deposit amount, in addition to a trading platform and a Bitcoin card. In order to get access to the interest rates, customers have to open a “BlockFi Interest Account” (BIA).

Even if the Bitcoin platform has to do without new users for the time being, existing customers would still have unlimited access to the functions of the platform, Prince assures in his tweet.

BlockFi is in an ongoing dialogue with regulators to help them understand our products which we believe are lawful and suitable for crypto market participants. BIA is not a security and we therefore disagree with the action taken by the New Jersey Bureau of Securities.

While Bitcoin and Ether are widely viewed as commodities by the SEC and CFTC, there is less clarity with other assets backed by BlockFi, such as Chainlink and Uniswap.

Tips and tricks to choose carpets for your home