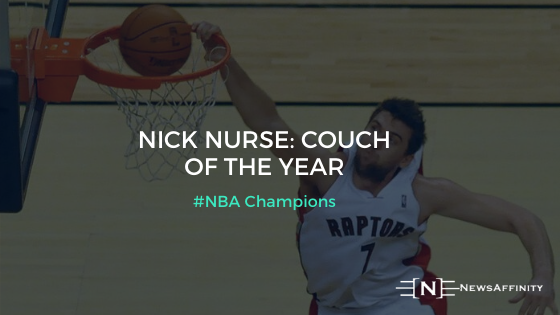 Following their recent slaughter of the Minnesota Timberwolves earlier in February, reigning NBA Champions Toronto Raptors are riding high on a record-setting 15-game winning streak. Once again, this just highlights the remarkable season the Raptors have had so far, the vast majority of which is down to Nick Nurse’s exceptional decision-making and coaching.

Nurse and the Raptors have had to deal with more than their fair share of injuries so far this season. Serge Ibaka had to sit out that winning game against Minnesota, so Nurse made some key adjustments to the team by placing Rondae Hollis-Jefferson in the starting lineup, whilst welcoming back Kyle Lowry from his short absence.

At one point during the season, Nurse had to figure out what to do when Norman Powell, Marc Gasol and Pascal Siakam were all out with injuries at the exact same time.

Nurse’s abilities were tested in precisely this way on December 22nd against the Mavericks, but his ingenious decision to have Kyle Lowry lead (resulting in him scoring a total of 20 points alone in the fourth quarter) meant that the Raptors were able to make a 30-point comeback and take the win.

It shouldn’t come as any surprise to hear, then, that now that NBA Award season is in full swing Nick Nurse’s name is circulating as a shoe-in for the honors, with bookmakers placing him at odds on favorite to win. Not just a favorite with the bookies however; it’s easy to make a case for Nick Nurse to win the NBA Coach of the Year in 2020, least of all the Raptors’ current standing just shy of the top spot in the Eastern Conference. If he is successful in scooping the award, it will also be the third one for the Raptors in recent history, with Sam Mitchell and Dwane Casey winning Coach of the Year in 2006/07 and 2017/18 respectively.

Remarkably, it wasn’t that long ago that some were questioning Nurse’s position as Head Coach for the Raptors, but as of now nobody has any reason to doubt him at all. It’s not just Nick Nurse’s almost clairvoyant-like ability to adjust his team so that they’ll succeed no matter what that deserves recognition, but also his emphasis on ensuring that every player who steps on court is of a certain level of fitness and capability.

For sure, there’s some exceptional talent and star power within the ranks of the Raptors, but it takes a coach like Nick Nurse to transform them into an elite, championship-winning team.

How to Get Started With Cross-Platform App Development