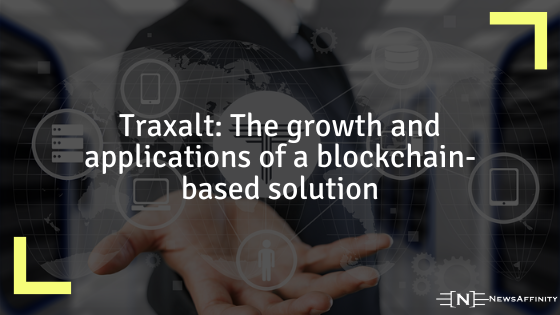 Since the inception of Bitcoin and blockchain technology, numerous cryptocurrencies and blockchain-based solutions have emerged. According to Yahoo Finance, there are more than 5,392 cryptocurrencies being traded with a total market capitalization of $201 billion dollars (as of April 22, 2020). This represents a huge market opportunity for this technological industry, creating a viable path for newborn cryptocurrencies or digital assets. Especially with the increase of digital resources implementation that has grown remarkably in the past months. And the growth of digital resources is being linked more frequently with blockchain technology, as it provides many advantages for individual or corporate users.

Because of this huge market opportunity that blockchain technology provides, Traxalt emerged. Traxalt is a digital asset based on the Stellar blockchain, which is a third-generation blockchain. Traxalt’s token is called TXT and it currently has one of the biggest holder’s communities in the blockchain world. It actually has the second position among all tokens in the Stellar blockchain. It is only surpassed by the token of Stellar, which is called Lumens, as it is token of the host blockchain. As of today, Traxalt has more than 971,520 account holders, almost reaching the 1M users and it was only launched in June 2019.

As it is well known in the crypto world, the community of a cryptocurrency is of great importance. Traxalt’s community is one of the biggest in this context and the brand focuses its efforts on strengthening it. A big and strong community is very relevant, as it forges a token as a more stable coin, which will result in less possible market fluctuations.

Traxalt has also a blockchain-based solution, which is the Traxalt protocol. As mentioned before, Traxalt is based on the Stellar blockchain and it provides a third blockchain generation platform that can optimize different company processes. The objective for Traxalt is to bring closer this technology and be the direct middleman between blockchain and individual or corporate users, by offering a customizable blockchain platform which can be adapted depending on the needs of the company. The Traxalt protocol offers many advantages, as it is blockchain-based. Some of these advantages are speed, safety, lower costs, immutability and transparency, as it provides an auditable transparent open ledger.

Some of the applications of the Traxalt protocol can be customized into a platform that could perform massive scale global payments processing, management of digital or physical inventory, supply chain management, document time stamping, automated auditability, among other uses, which as mentioned before, can be customized depending on the needs of the company. All these processes can reduce significantly the company’s costs as by using blockchain technology, processes can be programmed and automated, reducing human resources efforts and costs.

Basically, Traxalt is a blockchain solution for all those companies that want to optimize time and costs and to reduce the margin of errors that can happen frequently. By migrating systems and processes to the blockchain, many benefits arise including the implementation of a technology that is growing very fast and that is already being adopted worldwide and will continue to grow massively.

How To effectively do weight loss and maintain metabolism?