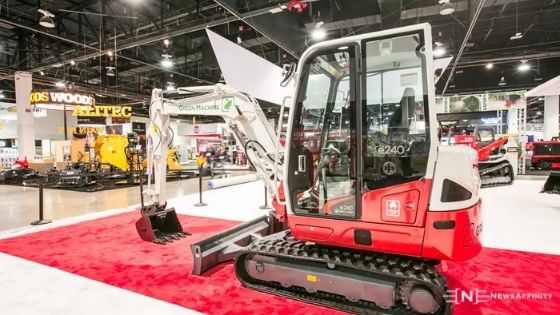 The Takeuchi TB257FR mini hydraulic excavator launched recently by the heavy machine industry leader replacing the TB153FR was a welcome addition to the industry as far as industry players were concerned. The new release that falls under the mini excavator category sports a side-to-side offset boom that has been affixed with a tight tail swing allowing complete rotation with minimal overhang. The operational weight of the new TB1 is 5.84 tons capable of a dig depth of close to 3.

9m with a max reach of slightly more than 6m coupled with a bucket breakout force of approximately 37kN. Other notable features of this ‘masterpiece’ as mentioned by Takeuchi’s product development personnel includes the side-to-side boom feature which allows the ‘mini monster’ to dig from any position (right or left side) without having to reposition the machine for balance as it was with the previous model as this feature allows counterweight to stay smack centre of the machine.

A survey by independent construction commissions indicated that the advantage of this kind of system is the boom’s ability to be deposited to the centre of the machine allowing full rotation within the boundaries of the track width. This makes the Takeuchi TB257FR mini hydraulic excavator an ideal candidate for performing in confined job areas such as roads and bridges or even cramped streets in urban areas or in the back alleys of tall buildings.

“Construction sales reps are all excited with the machine and could be said to be as excited as Takeuchi itself due to their ability to offer customers all of Takeuchi’s experience in a single machine through the TB257FR,” says the president of Takeuchi, Toshiya Takeuchi. He added “Takeuchi’s commitment is based on our tradition which has always embraced innovation and court it with advancing technology”.

From greater versatility due to its side-to-side offset boom and the well-placed low centre of gravity, cab comfort and optimised counterweight, Takeuchi has indeed gone above mark with the TB25 that is not just a stable platform with lifting capabilities, but a platform with lifting capabilities that are almost equal to that of conventional machines and mini excavator hire equipment.

The race could be said to be ‘on’ and heated up as different manufacturers offer a variety of telematics packages through their own brand of mini excavators which does not actually have an established industry standard. As Takeuchi hinges on versatility and power, Hitachi mini excavators on the other hand are hinging on connections via remote monitoring system coupled with a Global e-Service through which data can stored or accessed via a smartphone.

Komatsu on the other hand is hinged on both aspects as did Kubota who are looking to maintain their industry leadership positions. Looking at the competitive structure of the industry, it would be safe to say that the industry is being driven by the expectations of the younger generation flooding the industry.

The new generation of customers are more tech-savvy than any other previous generation and they are able to better understand and utilise such features almost instinctively.