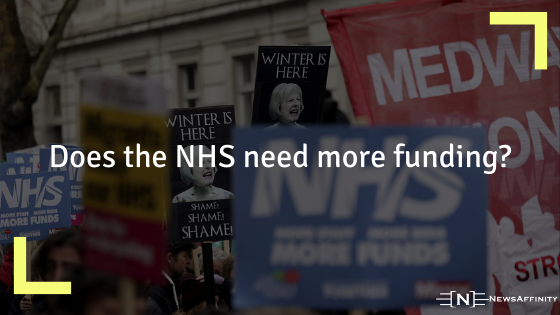 Year after year, we’re assailed with headlines about the dire state of the NHS, and how it’s badly in need of funding. In 2020, the situation has gotten even more grievous; enormous expense has been taken to keep the economy afloat during the pandemic.

How much does the NHS get?

And there are several pressures which suggest that these figures aren’t going to get any less colossal in the future.

What Factors Push the Cost of the NHS Up?

The growth of the population over time will push the cost of the NHS up. If there are more people, then the cost of providing them with healthcare will go up. Birth rates outstrip death rates in the UK by more than 100,000, while net migration sits at several times that.

More important than the size of the population is its composition. Age correlates with a range of health problems, ranging from osteoarthritis to dementia. The population of the UK is getting older. According to ONS projections, the number of people over 65 is expected to rocket by 8.6 million over the next five decades. This rise will be fastest among those older than 85 – precisely the demographic with the most complex, round-the-clock healthcare needs.

Without Extra Funding, What Happens?

Predicting the future is difficult when it comes to an organisation as complex as the NHS. But it’s fair to say that a lack of funding can affect the quality of the care provided.

This effect can be self-reinforcing. A lack of funding might cause a spike in medical negligence cases, which in turn might mean that the NHS has to shell out even more. The health service receives around ten thousand compensation claims each year. The outstanding cost was estimated in late 2019 to be around £83 billion.

If you’ve suffered because of medical negligence, and the NHS is at fault, then you might hesitate before making an NHS clinical negligence claim. The NHS charter enshrines the right to compensation, however – it’s among the mechanisms through which the organisation can identify problems and fix them.

Another consequence of a dip in quality could be an increase in the number of patients making the switch to private healthcare providers. This would push up the cost of healthcare for everyone, as you’d end up paying for a service that you never dare use, for fear that you’ll encounter a substandard quality of care.

7 Simple Reasons Why Everyone is Buying Bitcoin

3 Investment Vehicles to Know for 2021