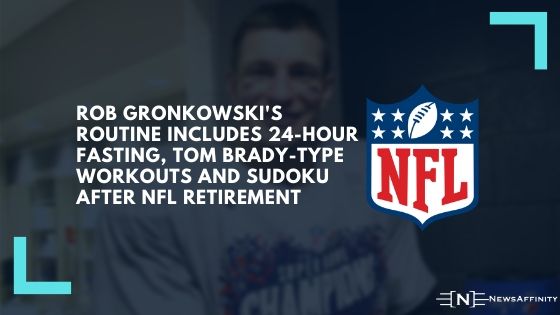 Throughout nine years, ex-New England Patriots tight end Gronk (Gronkowski) won 3 super bowls, and he earned over $9M. He said further that he is feeling better than ever since retirement in March.

He said “I feel like I’ve definitely transformed ever since I stopped playing football. I feel like I transformed in a better way”. Further, he added that he lost almost 10-15 pounds after changing his diet. He (Gronkowski) did stability workouts that he learned from ex-Patriots team fellow Tom Brady and by getting calmed his mind by solving Sudoku puzzles.

Gronkowski tweeted how Amazon has made staying active easier

Staying active doesn’t mean you have to train like the Pros which is why @amazon has made staying active even easier with their New Year New You storefront. Get all of your active-focused items all in one place. You’ll love it!! #founditonamazon https://t.co/CEPET0Q7AY #ad pic.twitter.com/wXV5JoS12B

Guys, it’s time to take your fitness to the next level!!! Let’s kick it into gear with my personal @amazon storefront. From pull-up bars, resistance bands to @iceshakerbottle shakers and @GronkFitness shower wipes, I’ve got you covered!! pic.twitter.com/TZCnlstrqj

He said “I just got the [Sudoku] book, and there’s like 150 physical puzzles in it, and I knocked out 15 already this week,” Gronkowski says. “It gets you thinking, it gets your mind thinking and gets you going. It gets the wheels turning”. Moreover, the puzzles, by eating healthy food working he says that he tries to contemplate whenever he can. While he admits, he does not consist Gronkowski believes in the practice.

The motto used to be #DoYourJob when I was with the @patriots but now it’s just, “Do Me.” Check out the new avenues I’m exploring in retirement!! 🤘🏻@uninterrupted x @sharpie #MoreThanASignature #ad pic.twitter.com/4uzhbrtgIm

Since October, he has been serving his services as an analyst for FOX NFL Sunday. Also, he says that he likes to go there and try to search for things. Tom Brady has been a reasonable control over the post of Gronkowski NFL health and fitness plan. He further added that after NFL, he has left eating according to his wills like fries and burgers and some organic fruits and vegetables. He grew up in buffalo he would want to eat everything he wants like chicken wings with many ranches and blue cheese dressing.

He tweeted how he is enjoying his retirement

Just testing out my new cell phone for some important business calls!
.
🚨Attention🚨To my teammates: you guys have tix on me pic.twitter.com/VNK8cKcQ3x

“Now he sticks through plant built protein shakes with almond fat, chia seeds, and fruits to get back afterward tests and has chicken with vegetables as lime beans, broccoli with sugary vegetables for lunch and dine.”

He said that once at a stage he lost 20 pounds and was at less than 240. And now I am 250, and I performed at around 260. According to him ‘he changed due to getting old. According to him, he hardly practices as the workout is the primary strategy to get the highest success.

He announced the Gronk Beach fantasy football contest! to meet him.

HYPED to announce the Gronk Beach fantasy football contest! Win a meet/greet with me, VIP Passes to Gronk Beach Big Game Weekend & more! Play FREE with your 1st deposit of $5+ thanks to my partnership with DraftKings. Enter by 3PM on 1/19: https://t.co/yQGpj4Qy22 T&Cs apply #ad pic.twitter.com/vvUFez6mM1

He joined Fitplan in January. The purpose of this joining was to engage himself as a private instructor on the app so that visitors can easily find his real schedule. He said;

“Public always questioned him about his work. I would like to tell them about my knowledge from my life. It’s my real opinion that hard exercise and practice begins with consistency.”

Bitcoin: A Lifeline in the Face of the Global Economic Collapse