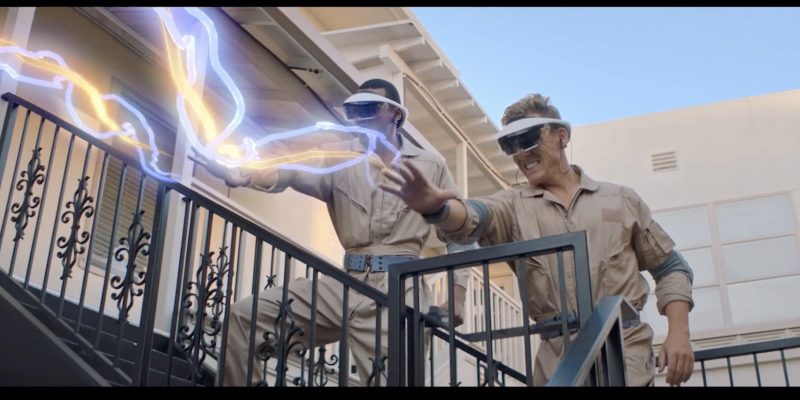 Augmented reality seemed like a miracle when it first came out, now its been used in games available for free to download online. The thing is the advancement of the tech has become so achievable nothing lasts as a miracle for long. Now its time for the big guns to turn their focus on the Augmented reality, and who other than Sony could be the first one. Sony is testing a new AR interactive in Japan to celebrate the 35th anniversary of Ghostbusters. If there’s something strange in you neighborhood, who you gonna call? GHOSTBUSTERS…ahm…sorry…

The company, starting from the 12th of October to the 8th of December, will let fans become Ghostbusters at Ginza Sony Park in Tokyo. The pack of fans, who will be wearing a prototype AR Headset, will be headed by trainers and will go around the venue finding and exterminating ghosts, hmm…quite exciting. And for the richies out there planning to go to the park to take a round, the activity is going to be conducted entirely in the Japanese language.

Sony announcing the activity on its blog, said, “Be a member of the Ghostbusters! Led by trainers, participants walk about Ginza Sony Park working together to exterminate ghosts that appear throughout the venue in this new attraction making its demo debut in Japan. Experience being a Ghostbuster with an entirely new sense of immersion, equipped with a number of tools including an AR device (prototype) that utilizes the latest in augmented reality technology. Those who participate in this demo will also receive a nice present.” Further, warning about the monolingual aspect of the activity, the company adds, “This activity will be conducted entirely in Japanese, and there will not be any language interpretation available. The application page and consent form are also only in Japanese. While participation is open to everyone, the activities rely heavily on instructions and team communication, so please kindly bear this in mind when considering whether to apply. We appreciate your understanding.”

And if you’re proficient in Japanese, then you can book yourself a place here.