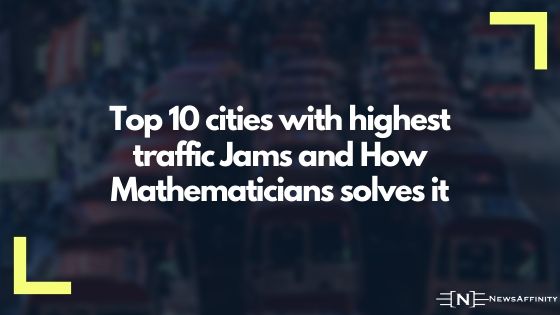 Most traffic jams are unnecessary, and this profoundly irks mathematicians who specialize in traffic flow.

They reserve particular vitriol for local transport engineers. “They do not have competencies in the field of system-related increases in traffic performance,” says Alexander Krylatov, a mathematics professor at St. Petersburg University. “If engineers manage to achieve local improvements, after a while, the flows rearrange, and the same traffic jams appear in other places.” Burn!

Krylatov would like to solve urban traffic jams forever, so much so that he has co-authored a book of new math approaches to traffic and ways to implement them. (Translation: Engineers, Let Us Handle This.) Four takeaways:

All drivers need to be on the same navigation system. Cars can only get efficiently rerouted if instructions come from one central hub. One navigation system rerouting some drivers does not solve traffic jams.

Parking bans. Many urban roads are too narrow and cannot get physically widened. Traffic-flow models can indicate where parking spots should get turned into lanes.

Green lanes. For cities that want to increase electric car use, particular paths should be created for electric cars, providing an incentive for their use.

Digital twins. Traffic demands and available infrastructure can only balance with digital modeling that creates an entire “twin” of existing roadways. The software will be “a handy thought tool in the hands of transport engineers.”

Traffic modeling is a complex branch of applied mathematics, partially because it assumes that drivers are selfish and pursuing their own goals, rather than any predictable or shared efforts. “Every year, a considerable budget is allocated for improving roads. [Our models] suggest a set of solutions for the efficient management of these funds.”

And just in case you were wondering, “The mathematical approach, in this case, is superior to the engineering and economic one.”

Here’s a list of the ten most congested cities

As per the ‘Traffic-Index’ study compiled by location technology specialist TomTom. The study surveyed traffic jams across 403 cities to determine congestion levels that can increase travel time (percentage) by using various parameters.

The city in northeast Brazil has a population of around 15 lakh and occupies the 10th spot on the list. It experiences the most massive traffic between 7 am, and 8 am and between 5 pm to 6 pm.

The Latin American city is at the ninth spot with a congestion level as high as 52 percent, which means travel time increases significantly by almost more than half. However, it is one of the very few cities that has seen no change (rise or fall) in its congestion levels since 2017.

The capital of Thailand is known for its vibrant street life and ornate shrines. With a congestion level of 53 percent, the city has been ranked eighth on the list.

The sprawling metropolis on the Indonesian island holds the seventh spot with traffic congestion of 53 percent, down from 61 percent in 2017. During the day, the city witnesses maximum traffic between 5 pm to 7 pm.

Straddling the continents of Europe and Asia, Istanbul in Turkey holds the title of the second most congested city in Europe, while occupies the sixth in global rankings. A 30-minute drive to the town during rush hour can double the time it takes to reach one’s destination.

The Russian capital witnessed a congestion level of 56 percent in 2018 with a marginal decrease of 1 percent as compared to 2017. However, the average daily congestion in the city on the worst day could be as high as 125 percent, hence proving to be a menace to the public.

The capital of India finds its way to the top 5 with a congestion level of 58 percent. The city’s traffic has seen a decrease of 4 percent congestion since 2017. While one might witness congestion of up to 73 percent during morning rush hour, maneuvering your way through the city’s streets during the evening might prove to be unwise as traffic levels sometimes shoot up to 93 percent.

One of the largest cities in South America, the Peruvian capital ranks third on the list. The congestion level here has seen a whopping 8 percent rise since 2017, currently pegged at 58 percent. On worst days, traffic in the city can get as high as 83 percent.

Taking the second spot on the list is the Colombian city that has a congestion of 63 percent. The city’s traffic has seen a rise of 1 percent since 2017.

The financial capital of India is the most congested city in the world. Its congestion level peaks at 65 percent. Factors such as the lack of road space, simultaneous infrastructure projects, low adherence to traffic rules, and high population and car density are the main reasons behind the high traffic.