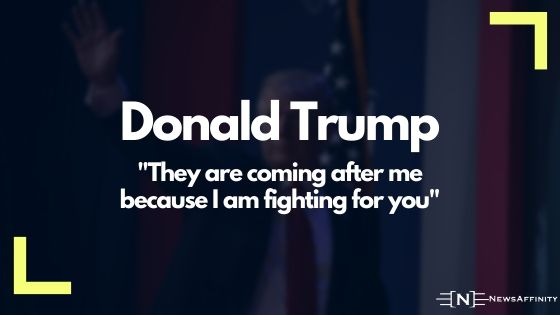 President Trump this week became the third president in US history to face trial in the Senate after being impeached by the House of Representatives.

And on Friday, he became the first sitting president to speak at the March for Life, the nation’s most massive anti-abortion rally.

In his speech, the president outlined his administration’s achievements in restricting abortion access, from reinstating and expanding the global gag rule to appointing conservative judges to the nation’s federal courts. As he has many times in the past, he cast Democrats as extremists who want to “allow a baby got ripped from the mother’s womb right up until delivery.” He also sent a message of solidarity to the activists in attendance, arguing that Democrats are attacking him for his tireless defense of anti-abortion interests.

“They are coming after me because I am fighting for you,” Trump said.

It wasn’t clear if he was referring specifically to his impeachment trial, but one thing is clear: Trump believes he needs the support of anti-abortion voters if he’s going to win reelection in 2020. Trump made history by appearing at the March for Life was a way for him to draw those voters’ attention. Not to what’s Congress is saying about him, he could do for them in 2021 and beyond.

March for Life tweeted that it was a historic day with President Donald Trump.

What a historic day with @realDonaldTrump! Thank you President Trump for your inspiring words at today’s March for Life. Together, we will continue building a culture of LIFE! https://t.co/1AjvJ6RaKp

The March for Life has been held every January since 1974, the year after the Supreme Court established the right to an abortion in Roe v. Wade. It’s a time when anti-abortion activists gather in Washington, DC, and around the country to protest Roe and push for stronger restrictions on Americans’ ability to terminate a pregnancy.

Historically, Republican presidents have addressed the event remotely, by phone or satellite link, as Marc A. Thiessen writes at the Washington Post. Trump himself has appeared by satellite in previous years. But this year, he decided to come in person, inspiring praise from many anti-abortion advocates.

“Trump will be greeted as a pro-life hero because he is one,” Thiessen, who worked as a speechwriter for former President George W. Bush, wrote.

Trump does indeed have a long list of victories to point to when it comes to restricting abortion access. In his speech, he noted that he expanded the global gag rule, which prohibits some groups abroad that receive US aid from providing, giving referrals for, or talking about abortion. The law was imposed under former President Ronald Reagan and reinstated by every Republican president since. Still, under Trump, it applies to nearly 15 times more funding than it has in previous administrations.

He also mentioned his appointment of 187 federal judges, many of whom they have seen as friendly to the anti-abortion cause. And he touted his Supreme Court nominees, Neil Gorsuch and Brett Kavanaugh. Later this year, the court will have an opportunity to revisit the abortion issue in the case of June Medical Services v. Gee. With the addition of Gorsuch and Kavanaugh, the court’s conservative wing likely has the votes to overturn or significantly weaken Roe v. Wade.

Trump also called out his Democratic opponents in Congress and at the state level, arguing that they “have embraced the most radical and extreme positions” on abortion rights. He spoke of “taxpayer-funded abortion up until the moment of birth” and claimed the governor of Virginia “stated that he would execute a baby after birth.”

In reality, no law in Virginia or anywhere else allows killing babies after they are born. No Democratic legislators support this. Doctors, meanwhile, say that patients do not request abortions during delivery or at “the moment of birth,” nor do providers perform them.

But Trump has long focused on Northam’s comments as a way of arguing that Democrats are extreme on abortion. At last year’s State of the Union address, for example, he talked about “the case of the governor of Virginia where he stated he would execute a baby after birth.”

“Let us work together to build a culture that cherishes innocent life,” he said in that speech.

On Friday, Trump was addressing an audience of activists rather than the entire country. But his message was similar in that he sought to establish himself as a courageous opponent of abortion, standing against Democrats who he claims want to “execute a baby.”

However, Trump has not always opposed abortion, and some anti-abortion advocates were initially skeptical of his candidacy. But since his election, he’s sought to allay those concerns and paint himself as someone who can deliver on anti-abortion priorities. The goal, perhaps, is to convince evangelical and other socially conservative voters that even if they disapprove of him, they have to vote for him to ensure anti-abortion majorities in the federal judiciary and on the Supreme Court.

Socially conservative voters may not be particularly supportive of Trump’s impeachment, but now is still a good time for the president to remind them of all he has done for them and all he could do in the future. Trump delivered a message to everyone in the anti-abortion movement on Friday: an attack on him is an attack on that movement, too.

After China: Five People suspected of having Coronavirus in Scotland