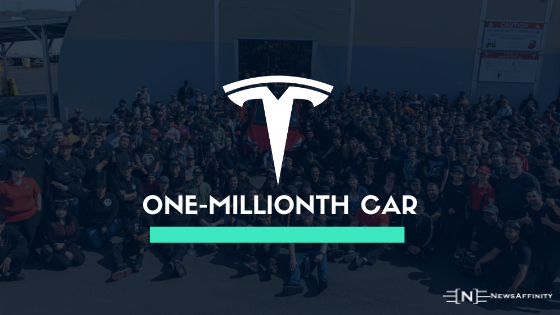 Tesla has finally produced its one-millionth electric car, the company’s CEO Elon Musk announced on Twitter. Musk shared a picture of the one-millionth car, a red Model Y. Musk congratulated the Tesla team on hitting the milestone. It’s a significant moment for an automaker that was only established in 2003.

The Roadster, Tesla’s first consumer car, got released back in 2008, and it took only a little over 12 years to grab the one-millionth car milestone. Despite, it could end up catching the two million mark a lot earlier based on current targets. In its January earnings report, the company said it believes in shipping over 500,000 cars worldwide in 2020. Toyota and Volkswagen group, the established automaker tycoons, each produce over ten million vehicles a year. Nevertheless, Tesla’s milestone is a massive success for an automotive startup that only provides electric cars.

Tesla hit the milestone as it begins producing more of its cars outside of the US. Near late 2019, it delivered its first cars manufactured at its Shanghai Gigafactory.

What a way to close out 2019, and this is only just the beginning.
Congratulations to the Shanghai team! https://t.co/N6U8qlTPWp

In the meantime, the company is also developing the site for its fourth Gigafactory near Berlin in Germany, after a court ruled that its tree felling work could continue following a challenge from environmental groups. After receiving the Golden Steering Wheel award from German auto publication Auto Bild, Musk said, “Berlin is great,” “I love Berlin.”

This month, Tesla expects to start shipping its latest car, the Model Y, ahead of its original plan “fall 2020” estimate. In the meantime, Tesla’s Cybertruck is due to go into production in late 2021.

Read how the outburst of Coronavirus in Shanghai erupted Tesla Model 3 construction.