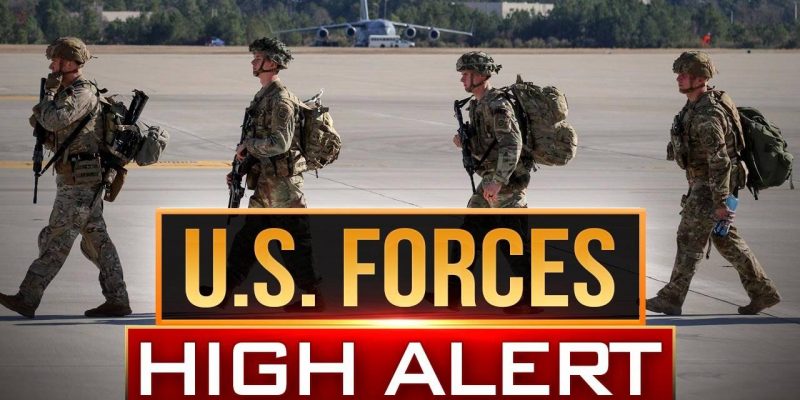 The strikes on two bases—Erbil in northern Iraq and the large Al Asad base in western Iraq—began about 5:30 p.m. Eastern time, U.S. officials said.

A defense official at a Pentagon briefing late Tuesday declined to speculate on whether Iran’s attack against the U.S. was complete, saying U.S. forces would remain in a “force protection posture” for now.

Must Read:- Donald Trump returns to the White House by threatening Iran and attacking impeachment

A first lieutenant in the Iraq army who was near the Al Asad base when the attack took place said he counted nine explosions. Helicopters were flying over the base, he said.

“These bases have been on high alert due to indications that the Iranian regime planned to attack our forces and interests in the region,” the Pentagon said.

Iran’s IRGC urged the American people to demand their troops be withdrawn from the region, warning in a statement that “any further aggression will be met with a more painful and crushing response.”

“We do not seek escalation or war, but will defend ourselves against any aggression”

However, President Trump in his own Twitter post late Tuesday said that evaluation of the damage was progressing.

“All is well!” he tweeted. “Assessment of casualties & damages taking place now. So far, so good!” He said he would make a statement Wednesday morning.

The Iraqi government didn’t immediately issue a reaction to the attack on its soil.

Iran’s action came hours after the planned burial of Gen. Soleimani was postponed following the deaths of at least 50 people in a stampede at a funeral procession. Gen. Soleimani was eventually buried Wednesday local time in the city of Kerman, where the commander was born.

Hours earlier, Mr. Trump and his top security advisers went before the public to make the case for having killed Gen. Soleimani as U.S. intelligence officials prepared for briefings to Congress late Tuesday and Wednesday.

In rolling appearances, Messrs Trump, Esper, Pompeo and national security adviser Robert O’Brien said Gen. Soleimani was a lifelong supporter of terrorist movements who posed a direct threat to U.S. troops and interests. “His time was due,” Mr. Esper said.

All four also said the airstrike that killed Gen. Soleimani at the Baghdad airport was a matter of U.S. self-defense. Gen. Soleimani was planning a “very big attack and a very bad attack for us and other people and we stopped it, and I don’t think anybody can complain about it,” Mr. Trump said in an appearance at the White House with the visiting Greek prime minister.

However, the administration kept any details of the timing of an Iranian attack plot out of public view, largely sidestepping questions about whether a violent action by Gen. Soleimani was imminent, as the president said on Friday.

“If you’re looking for imminence, you need to look no further than the days that led up the strike on Soleimani,”

Mr. Pompeo said, referring to weeks of sporadic rocket attacks against U.S. sites in Iraq that have been blamed on Iran-allied militias. One contractor for a U.S. company was killed and several U.S. service members were injured in a Dec. 27 rocket attack. The contractor was identified Tuesday as Nawres Hamid, a linguist who worked for Valiant Integrated Services LLC.

Mr. Esper in a CNN interview Tuesday said the death of Gen. Soleimani prevented an attack that was likely in “a matter of days, certainly no more than weeks.” Later, at the Pentagon, he said such an attack was more likely days away.

Sen. Chris Murphy (D., Conn.), who has viewed the classified notification the administration sent to Congress in the aftermath of the strike under the 1973 War Powers Act, said the document contains no information that hasn’t been publicly reported.

“There is no intelligence inside that document about this supposedly imminent attack,” Mr. Murphy said on the podcast Pod Save America. “So I remain open to being convinced that there was an imminent attack. But the fact that they haven’t delivered that information suggests that the information might not be as strong as Secretary Pompeo was suggesting.”

The public exhortations by the Trump administration included a call for Iran to agree to cease hostilities around the Middle East and come to the negotiating table.

Iranian officials have in recent days suggested they would strike one or more U.S. military targets. Iran’s parliament passed a bill Tuesday designating the entire U.S. military a terrorist organization, mirroring a step taken by the Trump administration last year when it branded the Revolutionary Guard a terrorist group.

“We will take revenge,” said Revolutionary Guard Maj. Gen. Hossein Salami, according to Iran’s Tasnim news agency. “And if they make a subsequent move, we will set fire to the place they love.”

President Hassan Rouhani of Iran struck a similar note. “The Americans should know that today their security and interests all over the region face dangerous conditions and they cannot remain spared from the consequences of this big crime,” he said in a phone call with President Emmanuel Macron of France, according to state television.

During the exchange, Mr. Macron called on Iran

“to refrain from any measure that would aggravate the escalation underway,”

according to the French leader’s office.

Gen. Soleimani oversaw Iran’s military interventions throughout the Middle East, including a campaign that the U.S. has said killed hundreds of U.S. and coalition soldiers in Iraq since the U.S.-led invasion in 2003. In the wake of his death, top Iranian officials have issued a stream of threats toward the U.S. and its allies, who are bracing for Iranian military retaliation.

The nature of Iran’s attack was unusual. During the U.S. occupation of Iraq, Iran used Iraqi Shiite militias to carry out attacks on U.S. forces using improvised explosive devices and battlefield rockets, a strategy that U.S. officials said masked the scope of its involvement.

But the attack Tuesday was strikingly different in that the ballistic missiles weren’t only fired from Iranian territory, but Iran openly acknowledged the attack.

“In the past, Iran has tried to preserve a measure of deniability by attacking Americans through proxies,” said Ray Takeyh, an expert on Iran at the Council on Foreign Relations. “This time, they seem more brazen and willing to take responsibility for their acts.”

Retired Army Gen. Joseph Votel, who served as the head of Central Command from 2016 to 2019, said that the attack might also be a message that the U.S. needs to address Iran’s concerns if it wants peace in the region.

“It means they are responding directly to our strike on Soleimani and not hiding behind their proxies,”

Gen. Votel said in an email. “It might also be a signal to resolve/de-escalate this situation, we will need to do it directly with the Iranian regime.”

The U.S. has sent thousands of additional soldiers to the region, putting the total number of U.S. troops, airmen and sailors in the Middle East at more than 80,000.

The U.S.-led military coalition in Iraq said earlier this week it was limiting operations in the battle against Islamic State and instead focusing on protecting itself from potential attack. The North Atlantic Treaty Organization said some of its personnel on a training mission in Iraq would leave the country.

The U.S. Federal Aviation Administration late Tuesday issued restrictions to prohibit U.S. commercial flights in the airspace over Iran, Iraq and the Persian Gulf. The agency said it would closely monitor the area, coordinate with national security agencies and share information with airlines.

Mr. Trump on Tuesday appeared to back away from his threat to target Iranian cultural sites if the confrontation escalates. On several occasions, he reiterated the threat to strike such sites, even though Messrs. Pompeo and Esper insisted any strikes would be conducted in accordance with international law, which prohibits the destruction of cultural sites.

Mr. Trump said. “But think of it: They kill our people, they blow up our people, and then we have to be very gentle with their cultural institutions. But I’m OK with it. It’s OK with me.”

Mr. Esper reiterated Tuesday that the U.S. isn’t pulling out of Iraq, despite a draft letter by a U.S. general Monday outlining a “repositioning” of forces out of Baghdad’s international zone.

“The United States is not withdrawing from Iraq,” Mr. Esper said in an interview on CNN. “A draft, unsigned letter that was acquired by an Iraqi official has no import whatsoever.”

However, a flap continued over the letter, which ended up in the hands of Iraqis. In a cabinet meeting on Tuesday, Prime Minister Adel Abdul-Mahdi said he has accepted the letter as genuine. He also said a U.S. troop withdrawal was the only way to avoid conflict.

Huge throngs of people have attended funeral processions for Gen. Soleimani in recent days, ending in the deadly surge of people that left dozens dead Tuesday.

A video from the scene showed a pile of shoes and discarded clothes lying in the street, apparently left behind by people in the stampede. It wasn’t immediately possible to verify the images.

Mr. Zarif, Iran’s foreign minister, on Tuesday, said the U.S. had rejected his application for a visa, which he had sought to attend the United Nations Security Council meeting this week in New York. Attending the meeting would have given Mr. Zarif a platform to highlight the killing of Gen. Soleimani.

Mr. Pompeo declined to comment on any decisions regarding a visa for Mr. Zarif, telling reporters the U.S. would comply with its obligations laid out an agreement with the U.N. under which Washington allows foreign citizens on U.N. business to travel to the institution’s New York headquarters.

Huami and Studio take on Peloton with the Amazfit HomeStudio treadmill