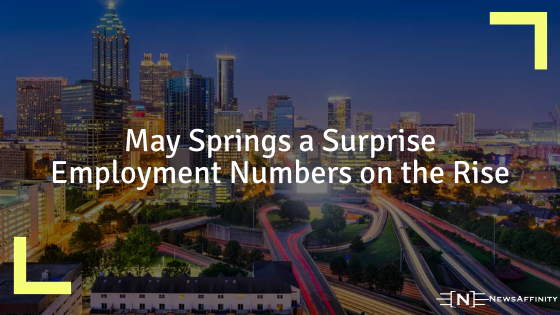 They say no news is good news, which given the COVID-19 pandemic, has special meaning for Americans and people throughout the world trying to climb out of the economic hole created by the deadly virus. Bombarded with negative economic news for a couple of months, some unexpected good news recently crossed the wires of reporters working throughout the United States. According to Newtrals, there was some pleasantly positive news released by the United States Bureau of Statistics (BLB) in regard to job numbers.

With many economists, including a few economists working for the White House, expecting a jobs report describing the loss of nearly eight million jobs, the April employment reports came as a “shock.” The BLS attributed the employment gain to a “a limited resumption of economic activity” that was severely disrupted by state and federal government reactions to the Coronavirus pandemic. The industries that experienced the highest rates of employment gains were retail, construction, leisure and hospitality, and education and health services.

Still, the BLS did not expect the type of job numbers for May for materialize until at least August.

The Employment Numbers for April

May’s job number arrived in just in time for Americans reeling from the devastating job report issued by the BLS in April. According to the BLS, a record 20.5 million Americans lost their jobs in April, which pushed the unemployment rate to the Great Depression-era level of 14.7 percent. Economists had expected the job loss total to hit 21.5 million, ushering in an unemployment rate of a staggering 16 percent. However, the BLS-issued unemployment rate for April did not include American workers that no longer participated in the job search process. Including underemployed American workers, April’s unemployment rate would have surged past 20 percent.

Are We Returning to a Robust Economy?

The devastating jobs data for April left many economists scratching their heads as to when, if ever, the American economy would recover from the impact of the COVID-19 pandemic. Chris Rupkey, who is the chief financial economist at MUFG Union Bank said in April the economy painted a “pretty dismal picture, but April may be it for job losses going forward with the country starting to reopen,” If there is a silver-lining in today’s dismal jobs report, it is in the realization that the economy cannot possibly get any worse than it is right now.” Rupkey touched on the keyword that might define how the American economy moves forward.

With states responsible for setting reopening dates, as well as the standards issued to reopen businesses across the industry spectrum, many economists predict the economic rebound should unfold in spurts. As of early June, some states removed most of the restrictions placed on local economies, while several states remain in some form of lockdown mode. Until each of the 50 states returns to a full-throttled economy, a full national economic recovery is still many months away.

The draft Bail of Monero during the protests

By Vikas Kaushik4 hours ago0