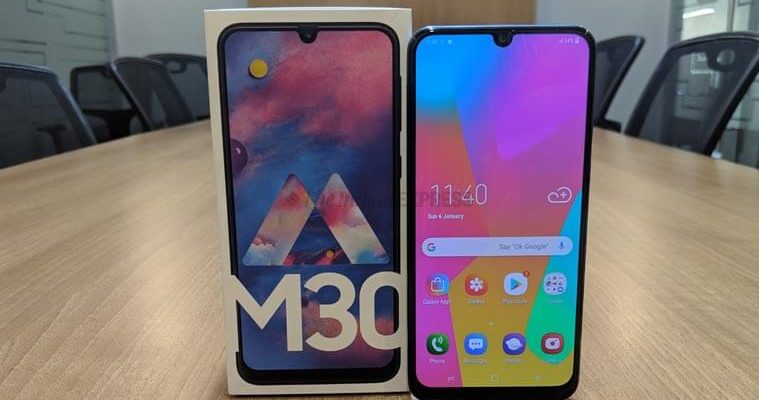 Samsung is about to launch its new smartphone device, Samsung M30s. It is now on the list of TENAA. There are a few specifications leak that has come up so far before its launch that is on September 18. Amazon is highlighting banners and exciting the smartphone freaks for this new upcoming treat from Samsung.

The essential feature leaks of Samsung M30s include a 6000mAh battery with a triple camera set up on the rear side. The primary rear camera will be of 48 megapixels, and the front selfie camera will be of 24 megapixels. It will run on the Exynos 9611 SoC processor.

The TENAA listings highlight the significant features in the photos of Samsung M30s. The front display will come with a waterdrop notch and a thin chin at the bottom. As the images tell, the fingerprint sensors are on the rear side of the phone in the center of the panel. In the recent leaks, the photos are highlighting the sporty gradient back finish with an oblong-shaped camera section that houses the flash along with the rear sensors.

TENAA’s specification page is not accessible for now, but all the necessary information is already out to the public. The Amazon ad page is also highlighting the key features and the sleek design of the new Samsung M30s smartphone.

From a recent report of last month by IANS states that the pricing of Samsung M30s will range between Rs.15, 000 to Rs.20, 000 depending upon the variants. The confirmed price is yet to know which will come up next week on the release date of the new Samsung M30s that is on September 18.

Some further specifications of this smartphone came up from the Senior Vice President of mobile business of Samsung, Asim Warsi. He spoke up to Gadgets 360 about the basic specifications of the phone. He said that Samsung M30s has a 6.4 inch Super AMOLED screen with Infinity-U Display. As of now, Asim Warsi has also given the confirmation about the implementation of 6000mAh battery in the new device.

From other sources, it is known that Samsung M30s is coming in 4GB and 6GB RAM variants and 64GB and 128GB storage variants. The weight of the device is estimated to be 174 grams, and the dimensions as leaked from the sources might be 159*75.1*8.9mm.

These leaks from various sources have now given broad information on the specifications of the phone. People waiting for this phone can now have an idea of the overall performance of the phone and wait for the purchase. The phone is going to launch on September 18, and Amazon will be the official partner with Samsung for selling this new Samsung M30s.

How Bussr is Taking on Student Transportation and Innovating It

There are many factors that contribute to helping students succeed in school; these include supportive teachers, a comfortable learning environment, and adequate teaching ...
By Vikas KaushikJanuary 11, 2021

LAS VEGAS – Robert Paisola, the CEO of Western Capital International, is a noted leader on The effects of Covid-19 on American Businesses ...
By Saurabh SinglaJanuary 6, 2021

Does the NHS need more funding?

Year after year, we’re assailed with headlines about the dire state of the NHS, and how it’s badly in need of funding. In ...
By Vikas KaushikJanuary 4, 2021