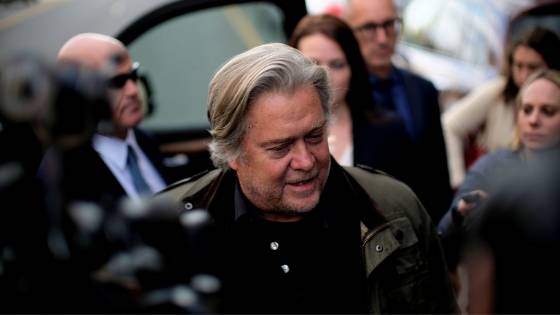 According to The Wall Street Journal, JPMorgan Chase & Co. and Wells Fargo & Co. have frozen accounts tied to fundraising for the company, GTV Media Group. Bank of America Corp. also closed an account for GTV Media’s parent company shortly after it was opened in recent months.

As reported by The Wall Street Journal, the federal probe is being conducted by the Federal Bureau of Investigation and the Securities and Exchange Commission. The investigators have been examining whether GTV Media or associates of Mr. Guo violated securities laws through the private share placement. The New York state attorney general’s office has also been examining the matter.

Soon after the fundraising, some investors began pushing for refunds after they said they never received official documentation verifying their investments in GTV Media, among other issues that led them to distrust Mr. Guo.

Mr. Guo, a former property tycoon who is now one of China’s most-wanted fugitives, and Mr. Bannon were two of the key people behind GTV Media’s launch this spring, according to a company fundraising document and interviews. The document identifies Mr. Bannon as a company director, while Mr. Guo served as the public face for its fundraising. Associates of Mr. Guo are listed as GTV Media executives, while Mr. Guo is described as a company adviser.

In a statement to The Washington Post last year, Guo said that all of the funds raised for the company are “intact” and that most of GTV’s investors are satisfied, and that the company followed rules set out by the Securities and Exchange Commission.

But with Donald Trump officially stepping down and the fall of Bannon, what will happen to Guo Wengui?

Last August, the former White House chief strategist Bannon was charged with defrauding donors to an online fundraising campaign to build a border wall. He was brought into custody by U.S. Postal Inspection Service agents while onboard the yacht of Guo Wengui. Though Guo had previously touted Bannon’s role, he said Bannon had been removed as chairman of the board after his arrest.

Trump distanced himself from Bannon following the arrest, calling it a “very sad thing” for Bannon, and insisted that he was not in favor of private funding for his border wall. The president called the effort “showboating.” “I know nothing about the project, other than I didn’t like it, when I read about it, I didn’t like it,” Trump said.

Now, although Bannon had been pardoned, what can he do under Biden’s administration? The only thing we can be sure of is that Guo has lost another “ally”.

Speaking of “allies”, in fact, he once had a core ally, Sara. Sara served Guo when he fled to the United States, and Guo also said in the live broadcast that Sara would never become his enemy. On December 2 last year, the Securities and Exchange Commission ordered G companies to refund investors. Then Sara asked investors to write a will on December 9 through a speech inside the home of their comrades or the Farm, so that the money invested in GTV can be inherited by future generations. Later, some investors took a screenshot and posted it on the Internet, questioning that it had violated U.S. law. They also accused Sara of trying to declare the will illegal and invalid after the death of the investors, so as to take the money cheated as her own. On the 15th, Guo denounced Sara for forcing their “comrades” in arms to write a will. In response, Sara announced the dissolution of her Phoenix Farm on the 16th. Later, Guo asked Sara to hand over all the debts and accounts within a limited time. Sara said that there are 117 million US dollars in the accounts of G companies, of which 70 million have been remitted to Guo Wengui. Now there are only 46 million cheques in hand. However, due to the closure of the bank account, it can only be returned after the review of the Securities and Exchange Commission of the United States. Since then, neither Guo nor Sara admitted responsibility for the repayment.

Get to Know PJ Matlock, Day-Trading Teacher and Connoisseur

Where are ecoATMs Near Me?