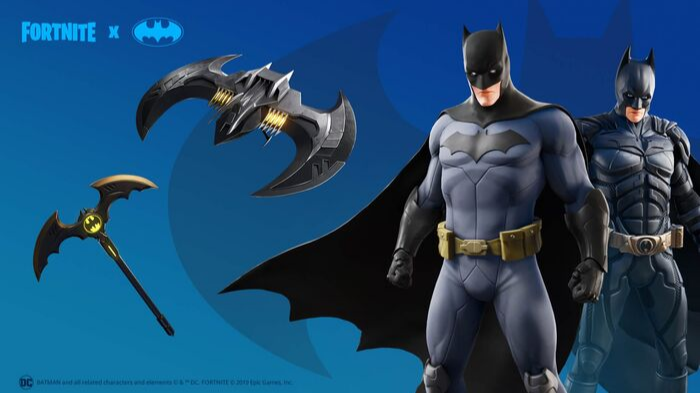 Finally, the dark crusader has invaded the Fortnite. It didn’t take long for Batman to follow Catwoman. The Dark Knight will be available from now to October 6th, and he has got 2 versions of himself. The Batman skins are in versions of DC comics and another from cinematic universe starring Christian Bale.

Players can get a Batman Cape and Caped Crusader pack with other cosmetics with news challenges based on the Dark Knight. There’s also an option of gliding like Batman with unlimited re-use of your glider.

There are many free gears and rewards also. A grapnel gun which will help you to cover long distances easily and Batarangs with explosives which can blast immediately or proximity mine if it is stuck in a wall.

Jim Lee, the CCO, and Co-Publisher of DC Comics has also commented on the crossover. “It’s the 80th anniversary of the Dark Knight, and we wanted to do something extra special for fans all around the world for Batman Day,” explains Jim Lee. “I can’t imagine anything bigger than letting the legions of Fortnite players take on the cowl and enter the world of Gotham City via Tilted Towers! Epic Games has really outdone themselves in bringing the world of Batman to Battle Royale!”

Fans have also reacted to the new Batman x Fortnite Crossover in the game:

Not only this, Fortnite has added Masashi Kishimoto’s Naruto emote in the game which was announced through the official Twitter account of Fortnite. The famous full tilt running of character from the Naruto series has been added in the game.

By Astha Singla8 hours ago0